Everything Not Between The Covers - Article 3.

To read in sequnce start with the June 16th post.

Fortunately, I have some graphic-design skills, which enable me to create my own book covers. From the expense point of view, that is huge saving when you consider the cost of having to rely and employ a professional to do the job for you.  I find it far more rewarding producing the image that is in my heart and head than second guessing what will be the finished product from a brief. I can also directly induce into the image the experience from a very deep and personal level which another cannot achieve. In this case, I lost my home and much of my financial wealth to a prominent international property promoter, MacAnthony Real-estate International (MRI). They produced through their salesman a property investment plan that was designed only to reap for them over exaggerated commissions.  A farcical and disastrous property investment plan (FaDPIP) was constructed on totally false information and can be classed as criminal, fraudulent and extortion. I wish I could come up with something better than FaDPIP, something which would roll off the tongue in a more sensible way. I have tried several other combinations but have drawn a blank. The depth of my experience, the lies, deceit and corruption produce an internal impact which I have tried in some way to express the intensity in the cover graphics. If I have not succeeded in that, then maybe I did succeed in portraying the lethal consequences of the investment property industry, that is the damage it can inflict on the unwary.

Sometimes I want to create something I just do not have the skill to achieve, after many failed attempts I settle for a secondary solution, but the end product always ends up Oh LaLa, that’s if you use the right version of Oh LaLa to mean "Um Yes!” Because I have more than one idea in my head this then requires the creation of multiple cover choices, which in a strange way can change the title to the book. I then have to go through an elimination process to find a happy medium. I will give you an example shortly, but generally I have come up with the title first from the books intended content, and then create the book cover around that. On occasion, I have abandoned one idea outright after hours of work, even after days of pondering over it, dissatisfied start again from scratch, such does the process demand sometimes.

Once the idea has gelled the next stage is to create all the elements that will make up the finished image. That mostly entails web searches, filtering through as many as required until I feel I have a sufficient stock to complete my project. I also have a vast stock on my hard drive and purchased disc collections for this very purpose. Once collected in a purposely created folder, so they can easily be accessed, it is time to open Photoshop, Fireworks and other programs that allow me to produce all the elements and then collate in one program. I have a reasonable command of Photoshop, no expert, but with enough knowledge of filters, blend modes and most of the tools. I can produce a reasonable end product. The Internet is always at hand to quiz Google, “How do I do this in Photoshop?” Just like waving a magic wand a platter of links to tutorials is at my disposal in seconds.

I have not taken a conventional approach to the finished covers. Firstly, I have not inserted my name as traditionally done as the author on the front. I am an unknown; my name is not going to mean diddlysquat to anybody. It is not an enticement that can be related to that this will be a good read. So it is modestly placed on the inside cover leaving more space and to make more prominent, in the case of Burning Down The Bricks, some profound comment about the internal content and issues of the book.

Traditionally, the front and back covers blend into a colour and image match scheme. Not with BDTB, I treat each as a distinct piece of canvas detached from each other. That produces two completely unlike graphics that will most likely not blend in anyway. If you flip front to back cover you could be reading two absolutely different books. Apart from the textual content, which is the one element that glaringly gives away, this is a front cover; this is a rear cover. I have abused the back cover in this instance with more profound comments instead of the normal review type paragraphs one conventional finds. If BDTB ever goes to print, then I will have to yield to customary norms and move my offending comments to the inside. Then produce the required type-bolstering text to replace it, hoping to entice one in to read and buy. The front and back covers were so distinct in contrast that after much consideration, I did tone the rear cover to some degree to make it blend with the front.

Below you can see the completed covers and the attempt to blend from one into the other over the spine of the book. Not so much of a smooth transition but a staggered leap. The fire element of the back cover was introduced later to tone a reddish, orangey overlay to blend with the front. The introduction of fire also gives an extra dynamic to the image statement, as well as continuing the idea through from the fore cover. 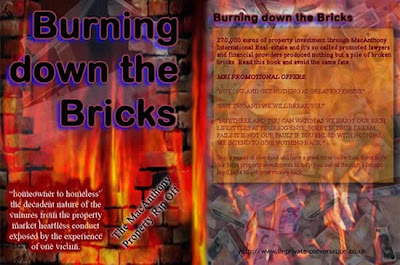 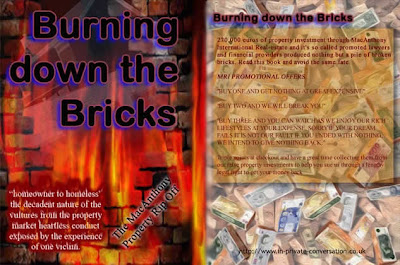 The version below trends to the more traditional cover style. The background main image has been faded by 20%. It is no longer sharp and as bright as the original. 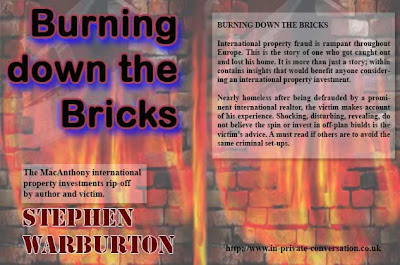 There are only four main images in the completed work. The same fire image overlays both covers, a wall with bricks missing out of the centre for the front and a pile of bricks, which makes up the back cover. If you look carefully enough at the front cover, top centre, the image of a house can be seen. This was my home in Northern Ireland, a detached three-bedroom home and I had no mortgage. Four currency images, the dollar, Euro, yen and sterling are manipulated to grace sides of the pile of bricks. The lot is shoved into Photoshop, blended, resized, cropped and subjected to filters and different tools.  Next are some of those individual elements. The house image has already been subject to some editing, as has the  bricks image. 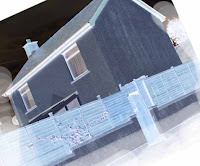 The whole image is projecting destruction, the fire, the wall with the hole in it, the pile of bricks. The currency notes represent the loss of capital wealth through fraudulent property investment; I literally end up with nothing, a pile of junk bricks. So from the front cover, a complete house and when the back is reached, total destruction has occurred, stripping of home and wealth.

The text compliments the image by revealing how this occurred, fraudulent property investment advice, the nature of those concerned projected as vultures and heartless.  It further proclaims the major contributor to bringing this about, MacAnthony Real-estate International, a company ran by Daragh MacAnthony. Even though the whole company name has not been inserted, it will be understood by others who have had dealings with it. To those who will be scratching their heads wondering who MacAnthony is, then by making the association with, decadent nature, vultures, heartless, homeowner to homeless, it is hoped will be enough to stimulate the inquisitive to open the book and find out.

I have on the back cover, which may only remain in the digital versions, used other ways through the text to express the deceitful nature of this corporate body. If Burning Down The Bricks ever goes to print, then this will be moved to an inside page and a traditional formatting favoured as in the example. This may not include the graphic changes, only the text, that will have to wait until it actually happens to see which will be favoured.

To finish Everything Not Between The Covers, I mentioned developing different cover designs and how those ideas could change the title to the book, even though the internal content remained the same. You can get the understanding of this from the two examples below. Tough choices have to be made; it is tempting to want to use Punching MacLies. Stomping on the Investors is a general statement about the overall fraudulent nature of the international property investment industry; it makes no relation to any one particular company, not even to the one that was responsible for my disastrous experience. 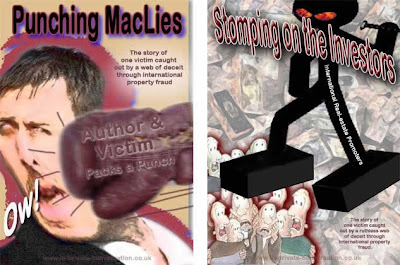 MacLies by the way, is a nickname given to Mr MacAnthony by those he has done wrong.  It came from his inability to tell the truth over a long period while trying to recover stolen investments by his victims.  I have inserted this because it gives a clearer perspective of how many view this man, and in my opinion, he has justly earned it.  He has lied through his company with the false property investments they advised to me and have never attempted to correct that error.

Next, everything Between the Covers, it will be some time before the next post arrives.

Version 3 now available and has been fully proofed and edited.  There are three extra chapters, many new inserted paragraphs and restructured sentence galore. Just hope it is enough for you to enjoy and read.


There is an on-line flipbook preview of BDTB which contains the introduction and the first chapter. Flash player is required in your browser link to BDTB.

There is one review on Amazon, here is the UK link .
The PDF version can be obtained from this link to PDF version.

Posted by Stephen Warburton at 1:43 AM No comments: